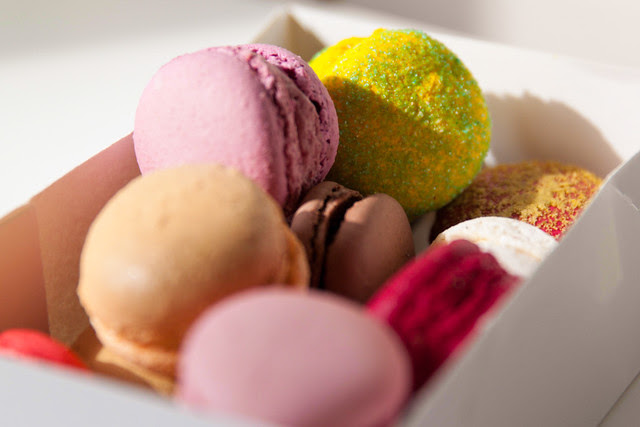 We had a little bit of sun today (see? in the top right corner of the picture!)
and some local treats to celebrate Jour du Macaron.
A little taste of Spring.
Enjoy!
Posted by Nicola at 11:39 PM 6 comments:

In Rome with no Baedeker

I was thoroughly spoiled for my birthday. Not only did I get to spend the weekend in Rome with Keith and NO kids, but I got a very nice new lens for my camera. It was the perfect place to try it out and I came back with 254 photos. These are just a few of them... 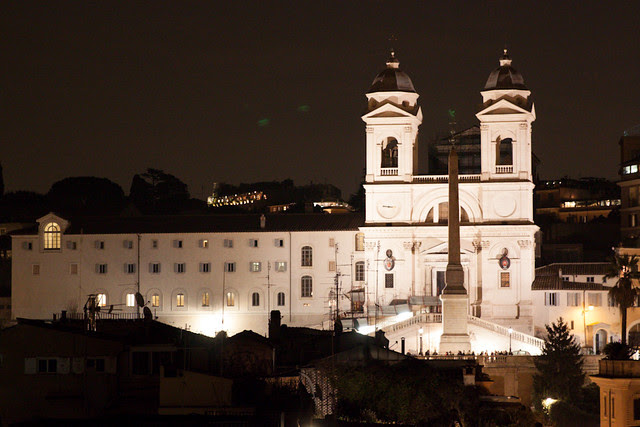 Our hotel was right in the center of Rome, just a few streets from the Spanish Steps. This was our view of them from the roof terrace bar. 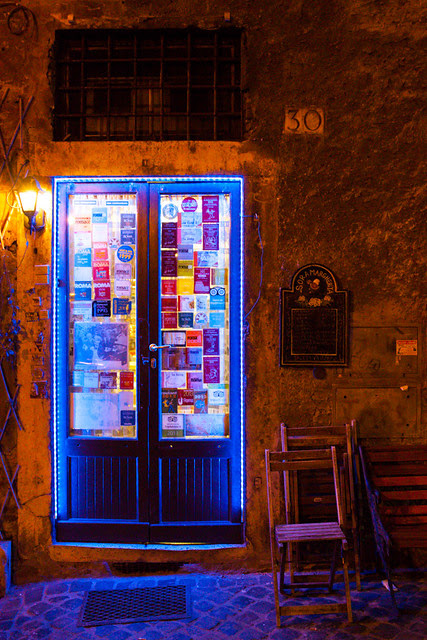 We began our weekend with a meal at Sora Margherita in the Jewish Ghetto, highly recommended by the hotel's concierge who secured us an impossible to get Friday night reservation. We would never have found this tiny restaurant by ourselves, although it must be in all the guide books as most of our fellow diners were tourists. It serves traditional Roman food at shared tables, un-romantically lit by fluorescent strip lights, which did at least help to keep us awake after a long day of travel! Our meal was good, but I wish we had been a bit more tuned into Italy and the food and language before we ate there. We weren't quite prepared yet for translating the handwritten Italian menu and as a result I think we missed out on the best dishes. Also don't order the litre of wine which comes in a carafe unless you want to feel like you are eighteen again. Although maybe that's the point of a 40th birthday celebration! 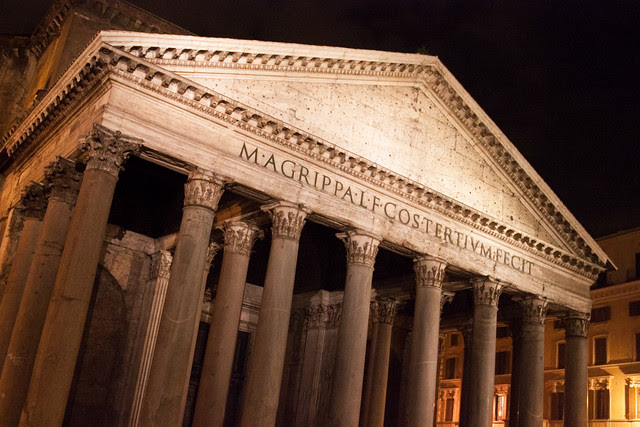 On our walk back from the restaurant to the hotel we started to soak up the atmosphere of the city, quite different to Paris, and without even trying came across the Pantheon. Nearly 2000 years old and still in use. 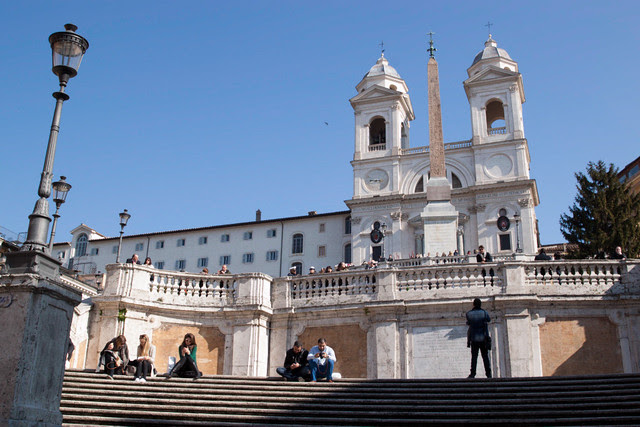 This was our first visit to Rome and we considered going on a guided tour on Saturday to make the most of our time there, but in the end decided just to set out walking and see what we found. Our obvious starting point was the Spanish Steps, very pretty in the morning sunshine. 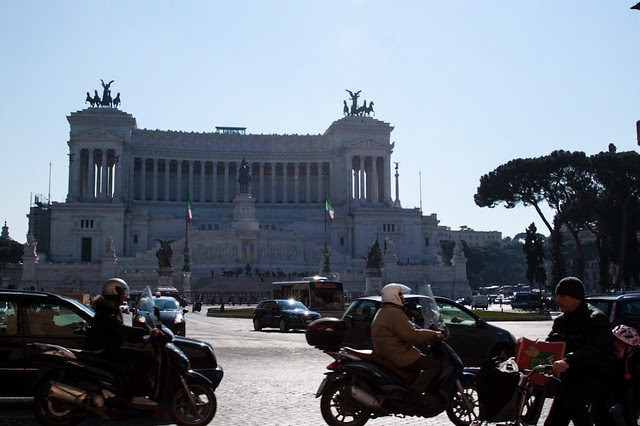 Next, we window shopped our way along Rome's fanciest shopping streets until we reached the traffic roundabout that is the Altare della Patria (Tomb of the Unknown Soldier). This monument was a surprise highlight of the weekend. More on that later. 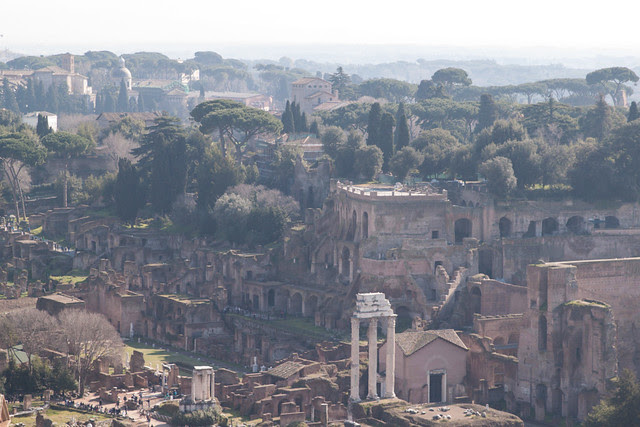 The Roman Forum as seen from the top of the Altare della Patria. This was as close as we got on this visit. Something to come back for!

We did go into the Colosseum. As we hadn't planned our day, we just joined the back of the ticket queue to see how quickly it moved. Not too much of a wait late on a Saturday afternoon in February, but I think it would be foolhardy to try and visit in the summer without buying advance tickets. 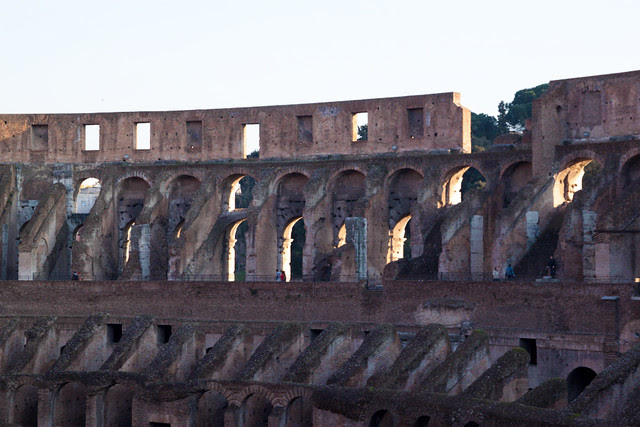 Once inside our audio guide filled us in with all the gory details of the stadium's history and you can't help but be filled with a sense of the past as you walk up the same steps into the arena that the Romans did thousands of years ago. 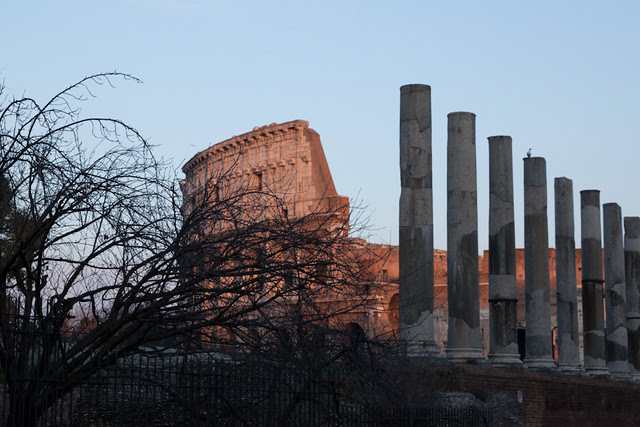 After a bit more meandering in the vicinity of The Forum (otherwise known as getting lost!) we returned to the Colosseum just in time to see it bathed in the glow of the setting sun. 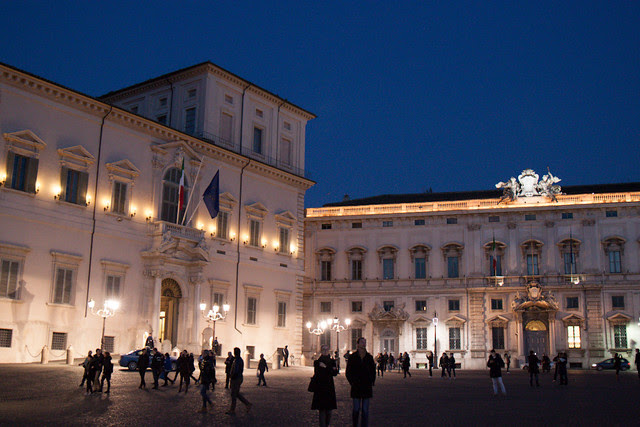 By this point we'd been on our feet for hours, so we grabbed a quick coffee then continued on with our mission to check off every site in Rome in a day. The Palazzo del Quirinale (former home of Popes, Kings and now the Italian President) looking quite lovely in the moonlight. 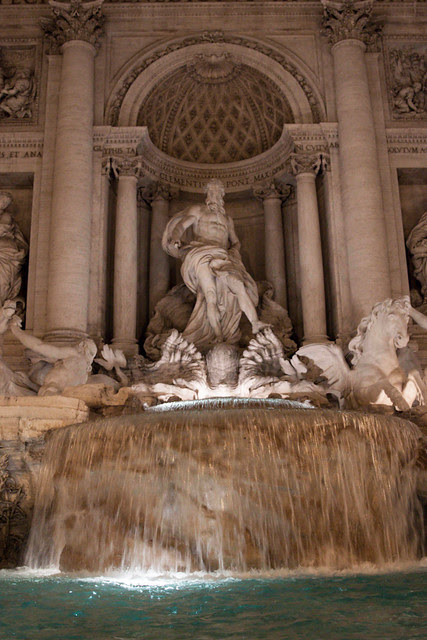 The last stop of the day before another romantic dinner was the Trevi Fountain. The camera is lying, this was where all the crowds were, we could barely move for tourists having their photo taken in front of the fountain and throwing in coins in the hopes of returning one day. Pretty much the same experience you get if you go to see the Mona Lisa in Paris! 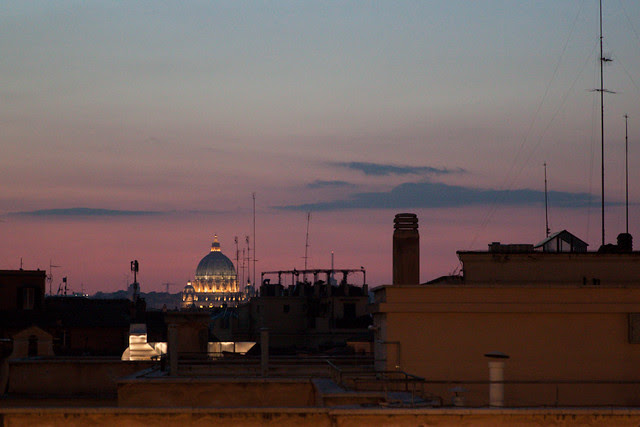 Our long day of sightseeing ended with a beautiful view of St.Peter's Basilica. Our destination for the next day. 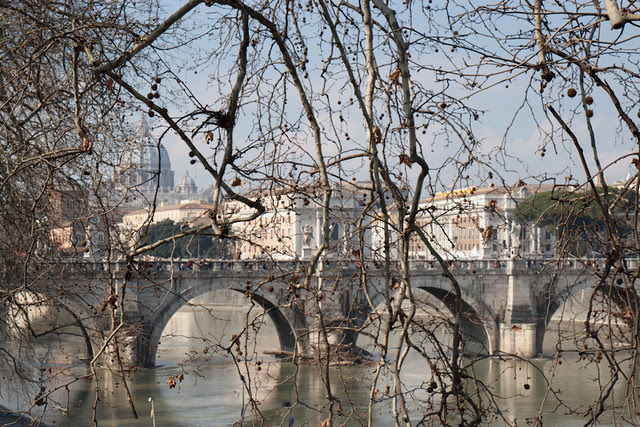 We chose Rome over any other European city for our getaway, mainly because we hoped to get a bit of sunshine to go with our culture. We were not disappointed. The weather was pleasantly warm and sunny for our whole visit which made it a pleasure to walk around and discover the city's delights. 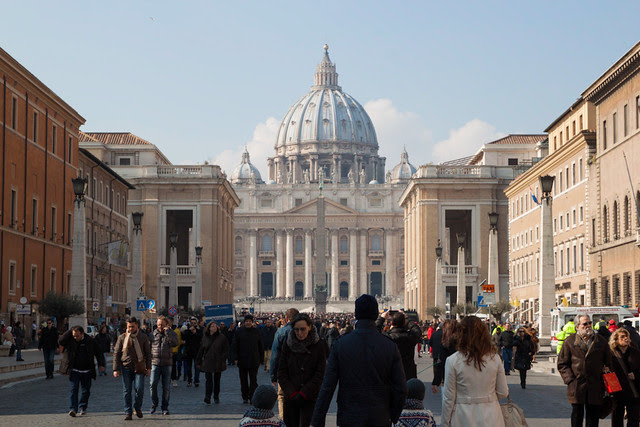 What we hadn't counted on was the Pope resigning the week before we got there! The first Pope to do so for 600 years, Pope Benedict XVI had shocked the world with his surprise announcement. Quite by chance, we arrived at the Vatican City just as the Pope was delivering his first Angelus blessing since resigning. Needless to say there was intense interest in the event with news crews from around the world joining the Catholic pilgrims to witness it. 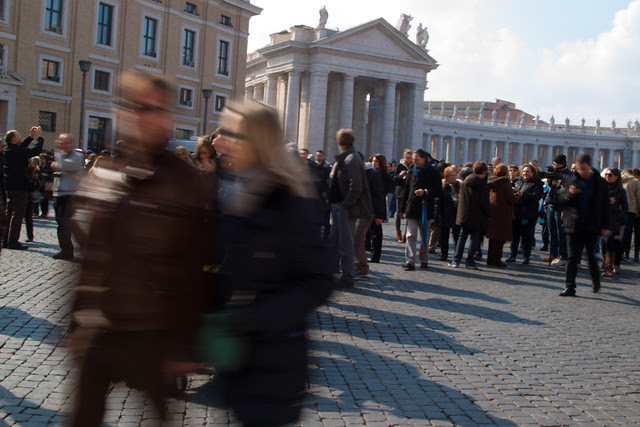 The crowds were unbelievable. With thousands of people leaving just as we were arriving, we could do nothing but stand and watch or else get knocked over in the crush. We are not Catholic, but it did feel special to be present at this unprecedented moment in history. 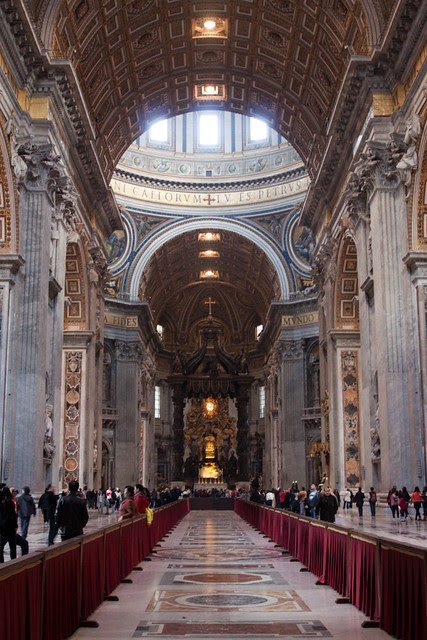 The Vatican Museums were closed that Sunday (they are open for free on the last Sunday of every month) so the Sistine Chapel will have to wait for another visit, but St. Peter's Basilica was open for business as usual. 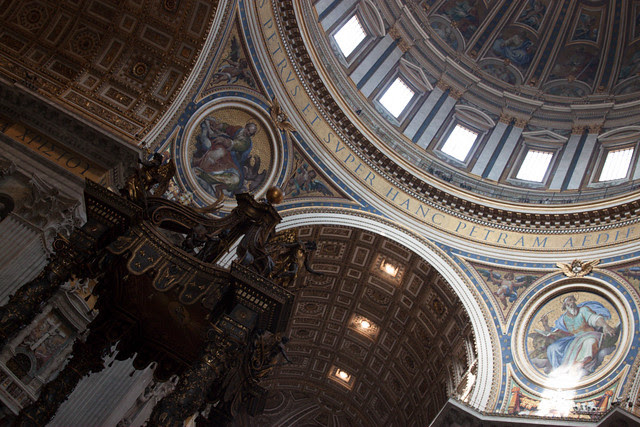 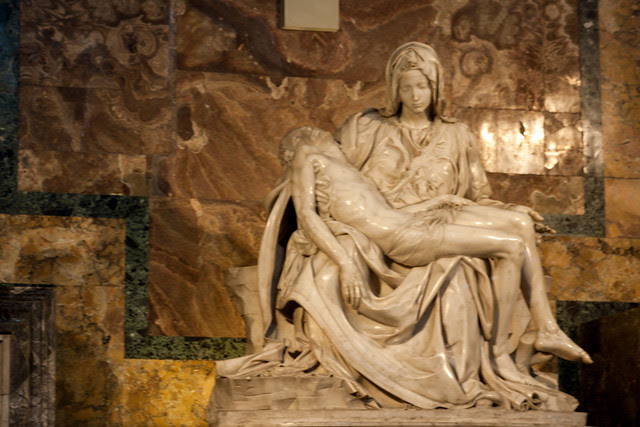 The church is immense and stunning but the humanity of Michelangelo's Pietà, the only work he ever signed, was my favourite. 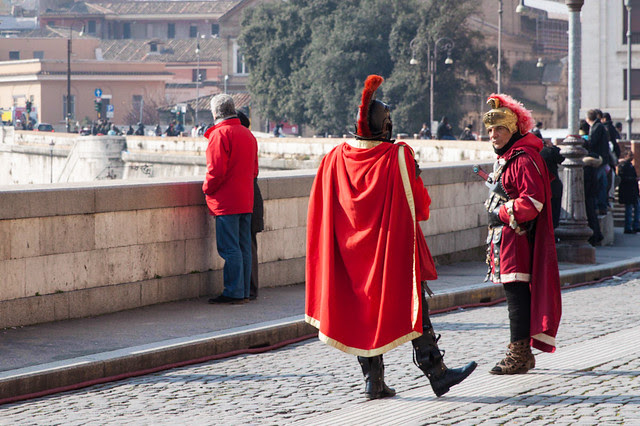 Rome, we loved it so much more than we expected to. We never did throw a coin into the Trevi Fountain, but I hope we will be back some day.

Follow my blog with Bloglovin
Posted by Nicola at 12:27 AM 7 comments:

This Moment. This time last week...

{this moment} - A single photo - no words - capturing a moment from the week. A simple, special, extraordinary moment. A moment we want to pause, savor and remember. Joining in with Amanda and friends at SouleMama 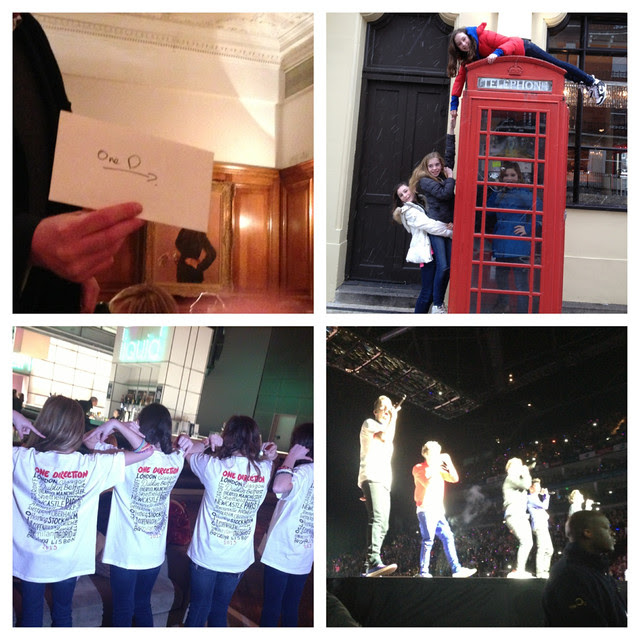