Well, the one shelf of Halloween candy in our local Super U has already been replaced by two aisles of Christmas chocolates but I promised you a costume round-up so here it is. 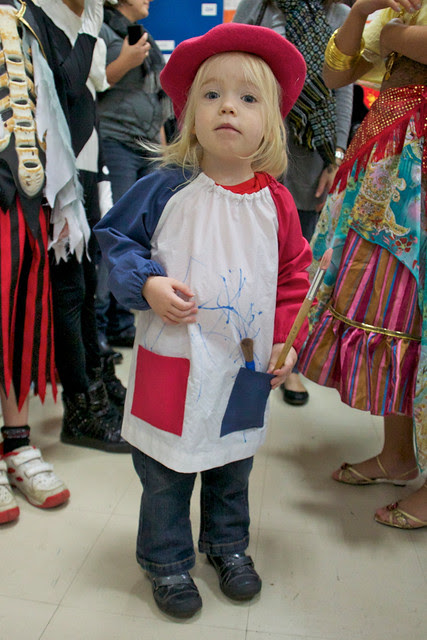 First up Florence who was a little French Artist. 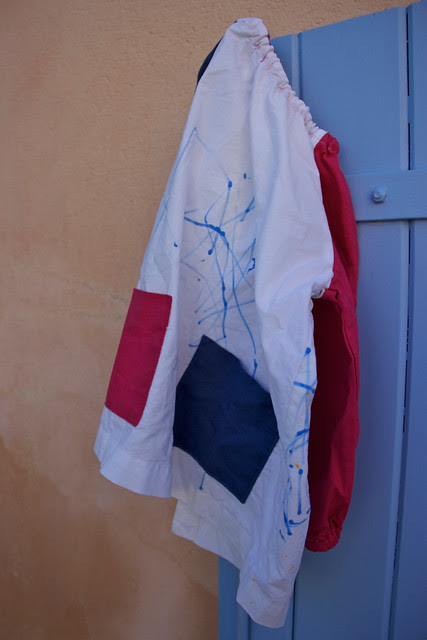 I was inspired to make this costume after I posted the pictures of the mess she had made with a permanent marker on our bedsheet. The act of putting that first picture up on the blog actually made me quite fond of her artistic efforts so I decided that as there was no hope of ever budging the marker from the sheet I might as well cut it up and preserve her art in a Halloween costume.

I used the art smock pattern from Little Things to Sew by Liesl Gibson and just like any Oliver + S pattern, it is a joy to sew, which is just as well considering I didn't start cutting it out until 10pm the night before the party! 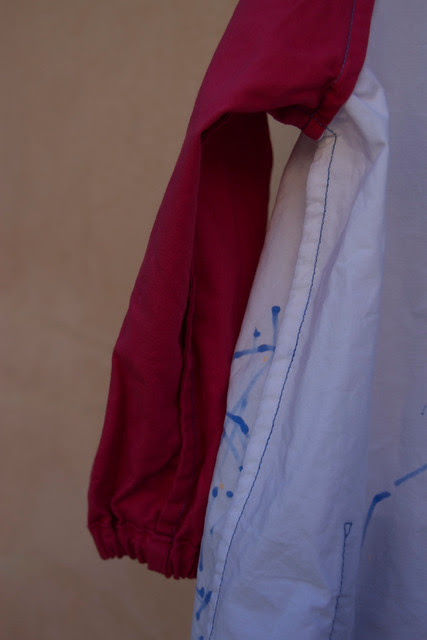 Even though I had only left myself a few hours to get this costume put together, I still couldn't stop myself using french seams like the pattern recommends. When in France... 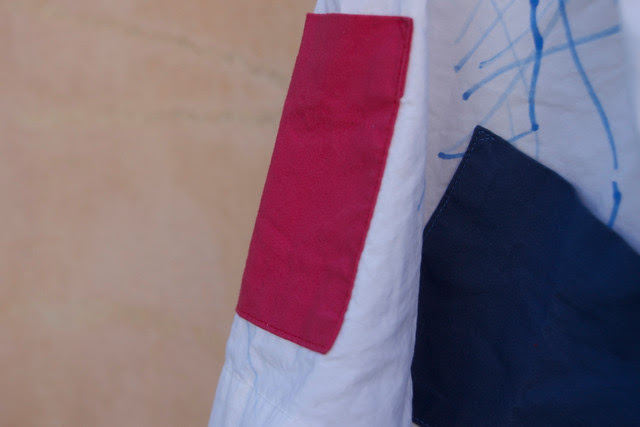 Or changing threads numerous times to match my contrasting fabrics. For, the record, I decided by the end that using the thread colour of the dominant fabric (cream in this case) would have been best from the start. If I ever make another one that's what I will do. 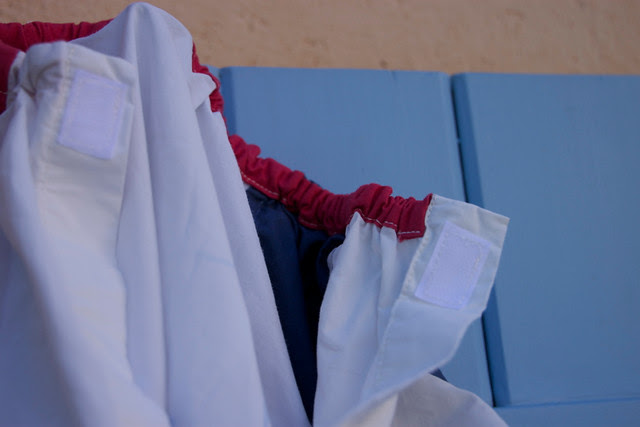 As I progressed with the project I could tell it was going to be something Florence would get use out of way after Halloween so I decided it was worth putting the extra effort in to make sure it holds together through numerous washes. Totally worth staying up past midnight to making contrasting bias binding that you can't see from the right side!

For such a simple looking design this pattern is full of clever tricks to make it come together neatly. I particularly liked the way the neck elastic and binding are sewn under the center back facing. A neat, time saving trick. Didn't quite get it right, the binding should have been tucked under the facing before I edge stitched it, but by this time I needed it done and out the door! 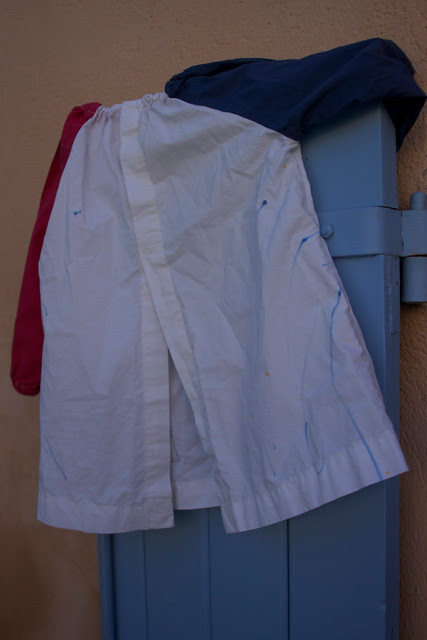 And while I'm confessing to mistakes, here's a biggie that will bother no one but me. I wanted the 'original design' to be centered at the back, but I got confused about what were side seams and what were center back seams so I cut it wrong. Maybe I will learn my lesson in future and cut out patterns in the morning when I'm a bit more awake and I can see what I'm doing? 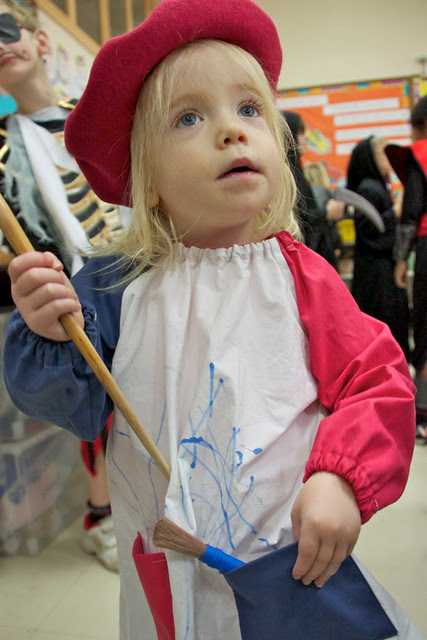 Once the smock was all sewn up, I dug out the beret from last year's Christmas photo and a couple of paintbrushes and she was good to go. I love the finished result and so does Florence. It was an easy costume for her to wear and she actually likes wearing that hat. The thread count was so high on that particular bed sheet that the sewing machine needle could barely punch through it so I'm hopeful this smock will repel all sorts of paint and marker activities for several years to come. 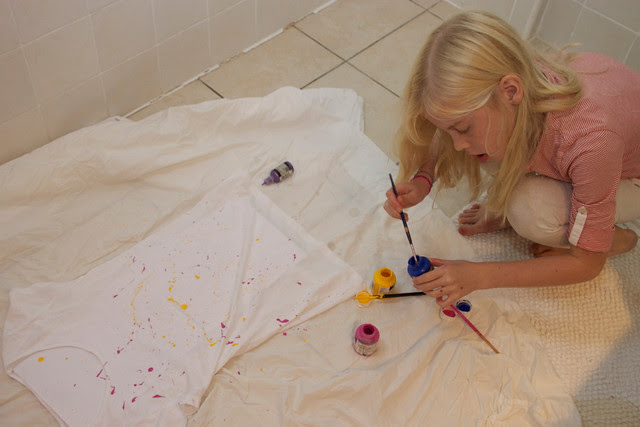 What's left of the bedsheet has a new life as a drop sheet, and was perfect for protecting the floor while Georgia and Savannah added their own artistic flair to their Halloween costumes. Whilst browsing the racks at Claire's Accessories a few weeks ago, they were inspired to turn themselves into 80s girls for Halloween. We picked up a couple of neon tutus (which I could have made myself had I had any neon tulle or time!) and some neon fishnet gloves (surely can only be made in China?!) and then bought a plain white t-shirt from the sale rack in H&M. 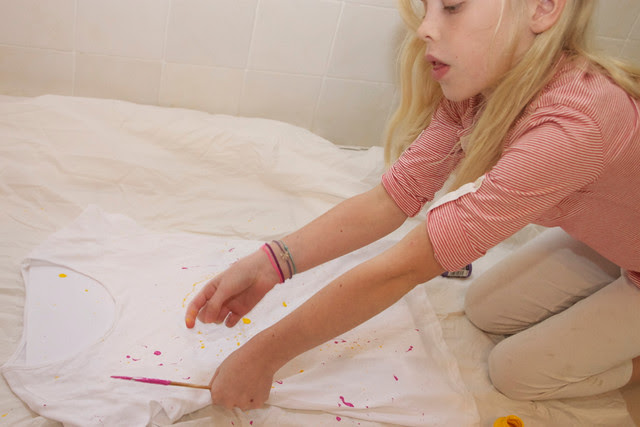 We thought decorating the t-shirt with bright paint splatters would add the perfect 80s touch whilst keeping a bit of the handmade that has been traditional in the girls' costumes ever since I made flower bonnets (to match India's flower fairy costume) when they were six weeks old. 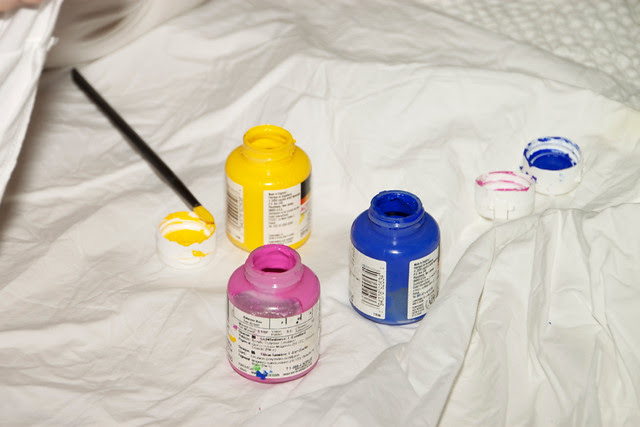 We used some acrylic paint that I've had in the craft drawer for years, and which I know from bitter experience doesn't wash off clothes once it dries! The girls splatted the paint over the front of the t-shirts and matched the colours to their tutus. 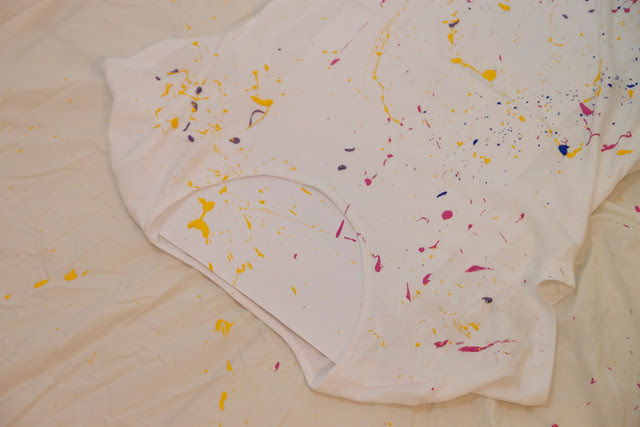 It took a bit of practice to get just the right splattering technique, but the end result was just the effect we were looking for. 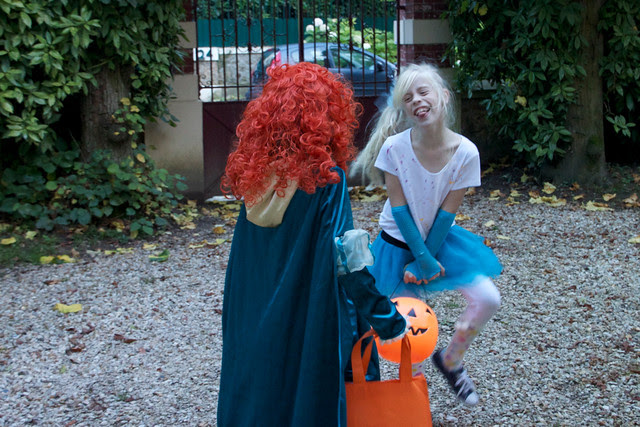 When the girls were all little, Halloween photo shoots were a big deal and would often result in the best photo I took of them all year. These days, I am lucky to get one photo of them in costume as they dash off down the street and this is the best I have of Savannah but I think you can see that she captured the look not to mention the excitement of the day. 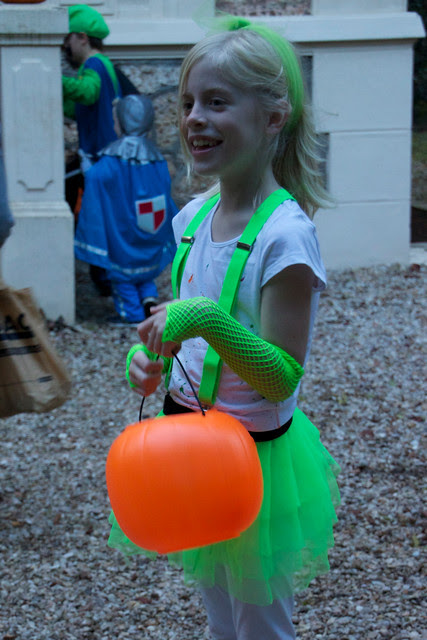 Georgia glowing in the dark. It took some convincing to persuade her that the tulle headband was authentic. That was a last minute hairstyle addition and it was only as I was tying it on for her that I remembered it should really have been lace. How could I forget? My one small act of rebellion at school when I was her age was flouting school uniform rules by wearing lace ribbons instead of the regulation grosgrain ones! 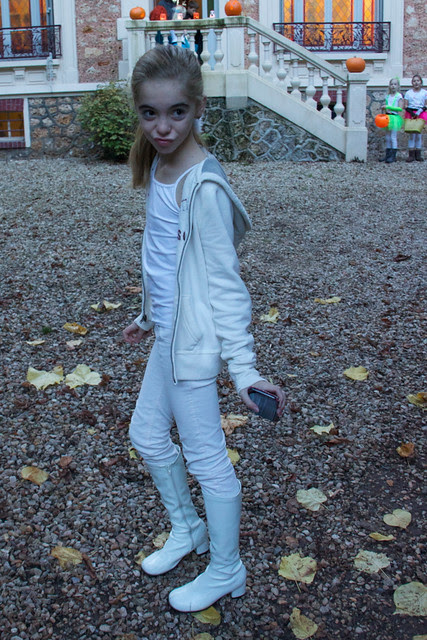 And last but not least... India who started off the day with her friends as a Disney Princess of which there is no photographic evidence, but went trick or treating with them as a colour. She was white - all pulled together from her own wardrobe but sporting the white go-go boots that have featured in all three big girls' Halloween costumes over the past few years.

So there you have it. For some reason, Halloween is the one time I seem to be able to make time to sew for all the girls at once. This year it was fun to have all of them participate in the making. I wonder what we will come up with next year?
Posted by Nicola at 10:37 PM 6 comments: 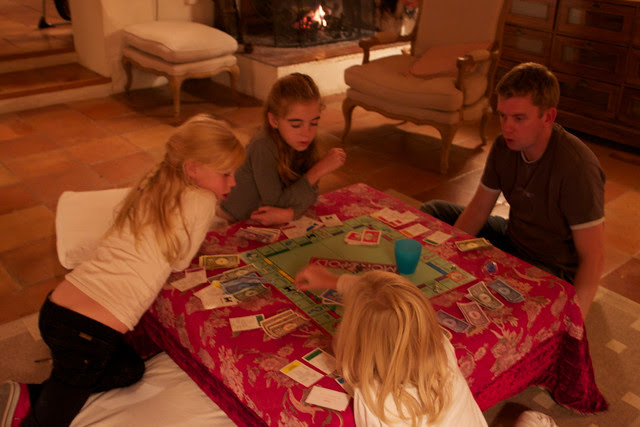